Three people from Iowa were hospitalized after a van crashed with a semi on I-90 near Imogene.

The state patrol says the semi and the van were both westbound on the interstate when the vehicles collided just after midnight Tuesday.

Jerry Eugene McAtee,  54, of Waterloo, was driving the van.  McAtee and his passengers, two men in their 30’s, were transported to United District Health in Blue Earth with non-life threatening injuries.  One of the passengers was not wearing a seat belt, according to a crash report.

The semi driver, Kyle Jason Kracht, 49, of Edgerton, was not injured.

The state patrol says roads were ice covered at the time of the crash. 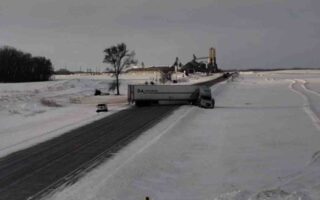