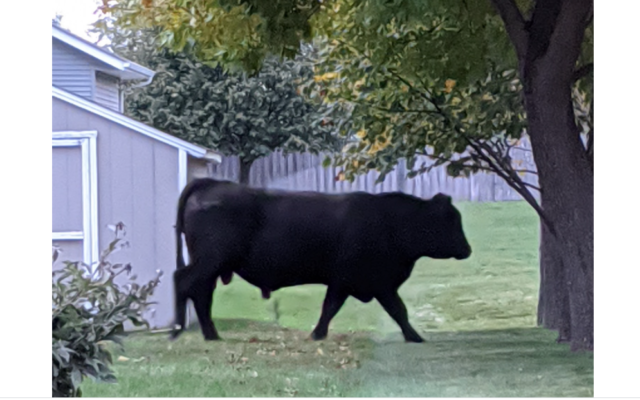 A bull meanders through Belle Plaine, snacking on neighborhood trees

(Belle Plaine, MN) – A bathroom break for the proud owners of a new bull turned into a fright for residents of Belle Plaine.

Police Chief Terry Stier (that’s pronounced “Steer”) said the bull had been purchased in Glencoe and was en route to Northfield when his new family stopped at the Belle Plaine Kwik Trip on Aspen for a bathroom break.

According to Stier, that’s when the new owner went to check the trailer latch, and realized the bull had escaped. The initial call to police was made at 6 p.m.

Stier said it’s not clear whether the bull kicked the latch off, or it came off while the vehicle was driving down the highway.

Belle Plaine resident Dana Bemmels said she had been at Kwik Trip picking up a few items around 6:45 p.m. that evening when she saw police on Church St.  The bull was between Church and East streets at that time, according to Bemmels. 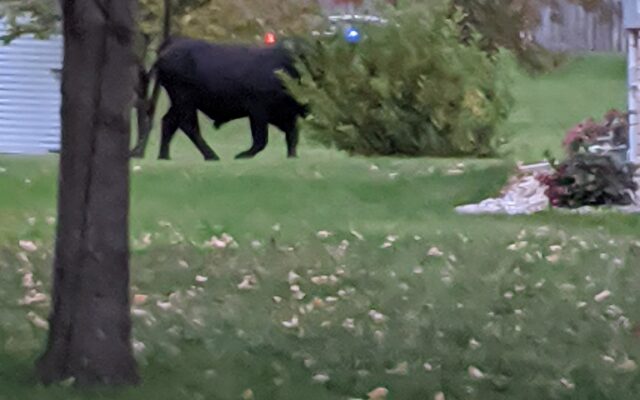 Stier said the bull meandered through some neighborhoods before a Scott County Sheriff’s deputy attempted to lasso him.  Law enforcement had cornered the animal near a sales barn with a penned area, but the bull managed to run off again.

Stier said a local farmer who owns cattle also became involved.  He suffered minor injuries when the bull charged, according to Stier, but refused any medical treatment.

The bull made chase for nearly two and a half hours before police finally captured him at 8:23 p.m.

“They were eventually able to get the bull corraled into the sales barn pen area,” said Stier. He said police department received many calls about the bull, and parent’s groups on social media were afire with the photos and sighting reports.

This is at least the second time in under six months that police have chased a wayward cow in Southern Minnesota.  In June, New Ulm Police shot and killed a cow that was on the loose in the city for over an hour.