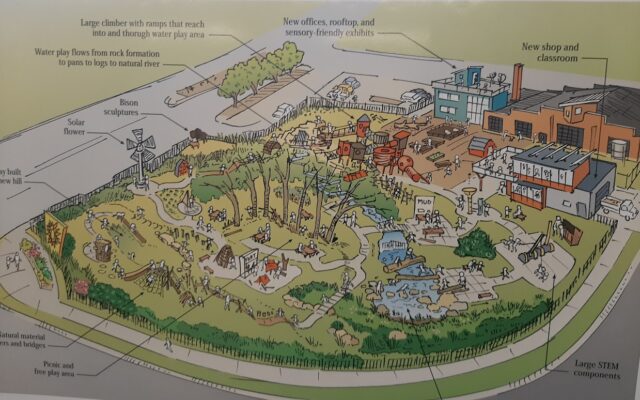 The Children’s Museum of Southern Minnesota had a goal from the very beginning to acquire the empty parcel of land next door.

With the help of the Mankato Area Foundation and two generous donors, CMSM has achieved that goal, seven years later.

Thursday, CMSM announced a major land purchase that will expand the museum’s space and outreach and give CMSM increased visibility on Riverfront Drive.  The .56 acre lot is adjacent to the museum on its east side, and stretches to Sibley Parkway.

The addition of the property will allow CMSM to “expand the power of play to an outdoor space,” said CEO Louise Dickmeyer.  She said the new play space will be a one-of-a-kind experience in Minnesota that will authentically redesign the future of outdoor play.

For donors Denny and Carole Dotson, Kay Jacobson, and her late husband, Lyle, the dream to expand the Children’s Museum of Southern Minnesota started far, far away – in New Zealand, in fact.

Denny Dotson recalled vacationing in Auckland with his wife and the Jacobsons, watching children play in a park.  The friends began talking about the property and how important it was that CMSM acquired it.  They didn’t want to see it go to another buyer, something that could stifle the museum’s ability to grow for years.  Dotson said the two families are thrilled to be a part of the acquisition.

Dotson is also excited about the increased visibility for CMSM.  “I suspect each of you before you knew this building was here, drove by on Riverfront many times and didn’t know the building and the Children’s Museum,” he said.  “That will not happen after this project.”

Several design concepts were on display during the meeting, which Dickmeyer said are just ideas at this point.  She stressed that CMSM would reach out to the community and regional partners for input on visual design and needs specific to whom the museum will serve.  “We want it to be totally accessible and able to be used year-round.”  Yes, even in winter.

The expansion is expected to be rolled out in three to five years in phases.  Dickmeyer said the planning begins tomorrow.

CMSM, which celebrates its seventh anniversary on May 1, has welcomed more than 670,000 people from all over Minnesota and around the globe.