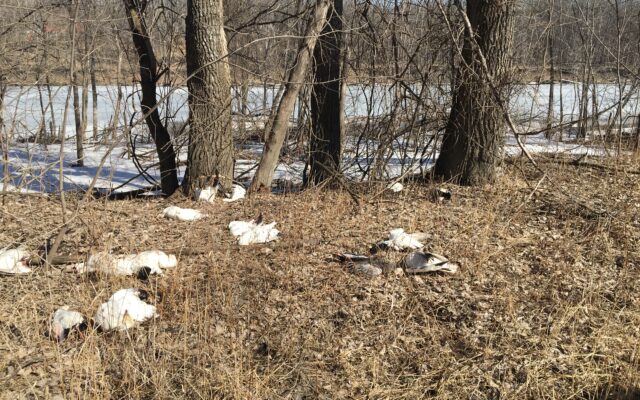 The Minnesota Department of Natural Resources is seeking information after dozens of dead snow geese were found dumped in Courtland.

Conservation Officer Thor Nelson told SMN he found the geese on March 15 at the Minnesota River public access in Courtland during his daily rounds.  One of the 27 geese had been partially cleaned, but the others were completely non-utilized, according to Nelson, who said he checks the area nearly every day.

Snow geese are not terribly common in Minnesota, according to Nelson, but they are in places such as the Dakotas and Canada. Those areas are trying to limit some of the population, as the snow goose has outgrown its habitat.  In Minnesota, the birds are protected, but Nelson says there is a “very liberal hunting season.”  Nelson suspects the dead birds were killed in South Dakota and dumped in Courtland.

The day after the dead geese were discovered, Nelson found wire conduit and electrical components left in the same place.

The person or persons responsible for dumping the birds could see charges of wanton waste and litter. Nelson says that even if the birds had been used, it would be litter to dump them at the boat access.

“State lands, and the public water accesses, the wildlife management areas, and other state and federal lands are just not a dumping ground for people’s yard waste, geese, electrical conduit, and household garbage,” said Nelson.

Anyone with information about the goose or electrical waste should call Nelson directly, at (507) 766-9770.