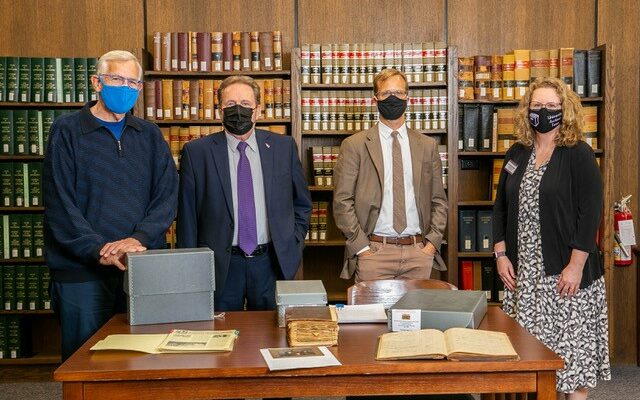 Dotson Iron Castings, rich with more than 140 years of history, has donated its company archives to the Southern Minnesota Historical Center at Minnesota State University, Mankato.

The iron foundry began in 1876, says current chairman Denny Dotson, when Laurentius Mayer started a blacksmith shop in downtown Mankato.  For 40 years, Mayer and his three sons built a business that produced hundreds of tractors, tens of thousands of power forging hammers, and even a car.

Dotson’s grandfather was hired to run the company, which he eventually purchased.  “My family has operated the company for the past 100 years and saw the operation become one of the best and most automated foundries in the world,” said Dotson.

The company’s gift is the largest single donation of its kind to the Southern Minnesota Historical Center in the last 20 years.  The archive consists of correspondence, subject files, contracts, employee and financial records, engineering drawings, photographs, and more. Dotson said the documents highlight the people, along with the ups and downs throughout the company’s history.

Brian Fors, a contract historian hired by Dotson, had already arranged and preserved the collection to meet the archival standards of the Southern Minnesota Historical Center.  “When Brian first saw the thousands of documents in hundreds of boxes, he immediately recognized that the collection had great significance,” said Dotson.  “There are very few small manufacturing companies that have such a complete history.”

“It is exciting to see these unique historical documents moved to a location where others, especially students, will have access to the collection,” Dotson said.  “Minnesota State Mankato, with its Southern Minnesota Historical Center, is the perfect spot for these records.”

MSU President Richard Davenport said the archives will be a “valuable tool in telling the story of the company’s contribution to the region.”