EagleCam chick perishes in the nest 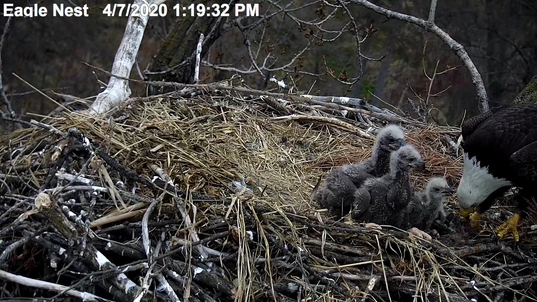 (St. Paul, MN) – The Minnesota Department of Natural Resources has reported a sad development in the EagleCam nest.

The third chick (the DNR called it E3) that hatched has died.

According to the DNR, the chick never caught up in size to its two slightly-older siblings, and competition for food has been fierce.

“We watched the chick fight hard, and it was alive as of last evening,” said a Monday release from the DNR. “But this morning there has been no movement.”  The eagle parents have not removed the chicks body from the nest yet, according to the release.

The DNR says the oldest chick (E1) is very aggressive in its instinctive behavior to survive, and notes that this is normal chick behavior.

It’s natural human reaction to wonder why this happened, says the DNR, which offered an explanation in the release:

“There has been a lack of substantial food deliveries by the parents.  There is fierce competition with other wildlife and between other adult eagles for available food sources.  While our camera does not capture what is happening on the ground or in the skies surrounding the nest, it would appear that food is scarce.”

The two remaining chicks will now have better odds of survival, according to the release.