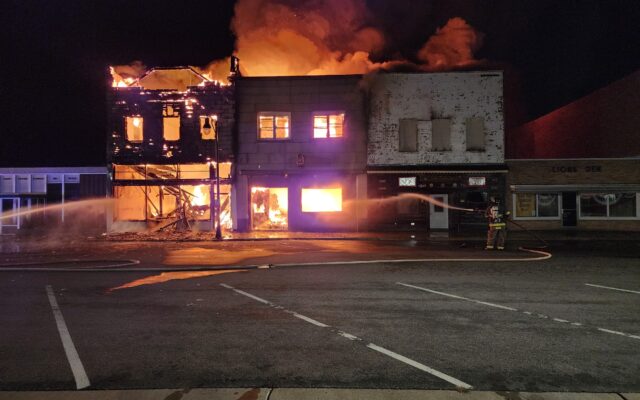 A fire has destroyed part of downtown Fairfax.

Fairfax Fire, Rescue & Ambulance responded at 4:35 a.m. to a report of a fire near the intersection of Park St S and 2nd Ave SE.  Crews discovered the structure was fully engulfed when they arrived on the scene.

Two downtown businesses, including three structures, were a total loss in the fire, according to a press release from the Renville County Sheriff’s Office.  A Fairfax resident told SMN that one of those businesses was the Smokey Hollow cafe.

The former Jimmy’s Pizza building and the former Rec Center building were reportedly also destroyed in the fire.  A resident told SMN that both buildings are currently vacant.  The post office and Lion’s Den also suffered minor fire damage.

The fire is under investigation by the Minnesota State Fire Marshal’s Office, the Bureau of Alcohol, Tobacco, Firearms and Explosives, and Fairfax police and fire departments.