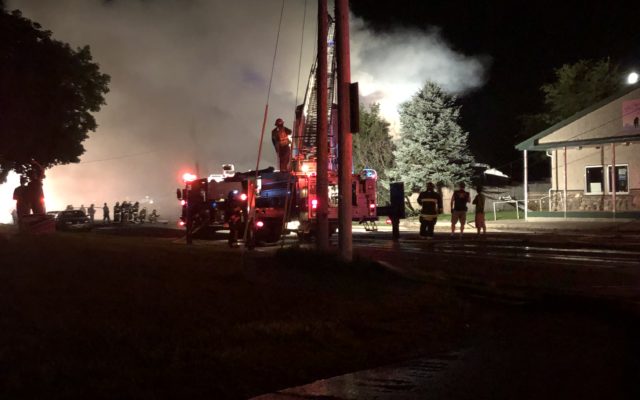 (Gaylord, MN) – Four people were saved from a roof last week during a nighttime fire in New Auburn.

The Sibley County Sheriff says deputies responded at 11:25 p.m. on July 28 to 7488 7th Ave, where a housing unit was actively on fire.  Two of three apartments were occupied at the time of the fire.

The sheriff says the occupants of the upstairs apartment needed assistance evacuating. Two adult women and two children were on the roof when emergency responders arrived.  All four were rescued from the roof, according to the sheriff’s office.

Moments after the people were removed from the roof, an explosion on the building’s second story caused live power lines to be thrown from the building, engulfing the entire home in flames, according to the sheriff’s release.

No one was seriously injured in the incident, according to the sheriff’s office.  The cause of the fire is still under investigation.

This story was updated with additional information from the Sibley County Sheriff’s Office.