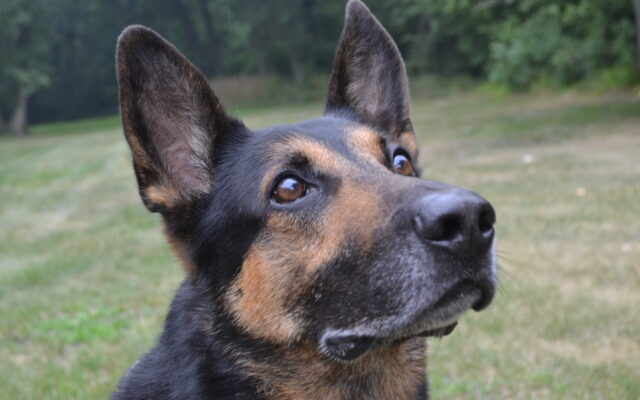 After 9 years on patrol, Renville County’s beloved K-9 dog Duke is headed for the fancy-free life of retirement.

Duke joined the Renville County Sheriff’s Office in 2013, where he’s been working with Deputy Luke Jacques throughout his career.  During that time, Luke and Duke have had a number of law enforcement adventures together, including locating missing people, recovering drugs, and apprehending criminals on the run.

Duke recovered 10 ounces of methamphetamine and seized $2,200 in drug money in his first case.  Since then, Duke has assisted in the recovery of 1,245 grams of drugs and helped apprehend five suspects who fled from law enforcement.  SMN readers might remember Duke from his 2020 triumph, in which he flushed a fugitive from his hiding space under a bed.

Duke, who was named by the students of Renville County schools,  has also won a number of awards, including 2nd place Team in Agility at the United States Police Canine Association in 2015.

Due to his age and declining physical abilities, it’s time for Duke to retire, but it’s anticipated that he’ll continue to live with Jacques and his family, which is where he has resided throughout his life.

“Duke has been a really great dog and it has been an honor to be his handler,” said Deputy Jacques.  “We’re looking forward to allowing him to live life at a much slower pace in retirement.”

Duke’s retirement plans include playing his favorite game of “chuck-it” at the park, where he fetches a tennis ball from long distances.  He also plans to spend quality time with his best friends, Hank the black lab and Buster the pug.   The Renville County Sheriff’s Office says Duke loves rawhide treats, so we’re hoping he gets a whole mess of them for retirement.