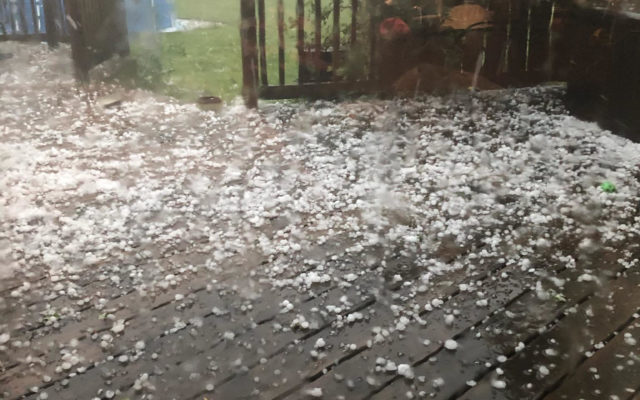 Hail fell in the Mankato area Tuesday night as a monster storm system moved through the upper midwest.

Severe thunderstorm warnings were issued around 7:30 p.m. in Blue Earth and the surrounding counties.  Reports of 1.5 inch hailstones near Gibbon and Vernon Center trickled into the National Weather Service.  Hail up to 1 ¾ inch in diameter was recorded in Mankato.

Near Faribault, nine semis were blown over on I-35 in the afternoon, closing down lanes of traffic for about an hour.

Taopi, in Mower County, is reporting severe damage from Tuesday night’s storms, which included a possible tornado. The entire town, with a population of just over 50 people, was evacuated Tuesday night.  No one was killed, but several people were injured.

Mower County Sheriff Steve Sandvik said in a news release that two residents were trapped in their basement, but were later rescued and transported for evaluation and treatment of non-life threatening injuries.  Shelter was also supplied for three families, according to the release.

Authorities are asking people to stay away from the area as crews begin clean-up.

Mower County is asking for photos to be emailed to Emergency Manager Amy Lammey for damage assessment.