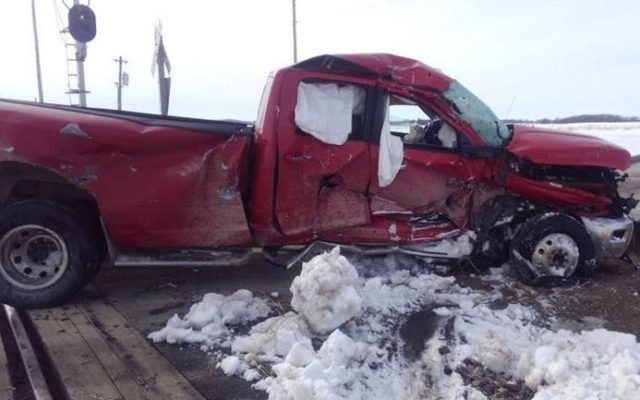 (Albert Lea, MN) – A Hayward man is listed in fair condition following a train vs pickup crash in Freeborn County.

The Freeborn County Sheriff’s office said they received a 911 call just before 10 a.m. from a Union Pacific train engineer who reported that his train had collided with a Ram pickup at the 120th St crossing near Highway 65.

The engineer told deputies the train was northbound, traveling at speeds around 35 to 40 miles per hour as it approached 120th St.  The pickup slowed down enough that the engineer believed it would stop, but he told police it continued into the crossing, despite the whistle.

Police say Walstrom’s truck was t-boned on the passenger side of the pickup and pushed about 60 to 75 feet before coming to a stop.

Walstrom was the sole occupant of the vehicle.

The accident is the third train vs vehicle crash in southern Minnesota in under a week.  On Feb 19, a semi hauling a full propane trailer was hit by a train in Cobden, in Brown County.  Just days later, a Bloomington woman collided with a train in New Ulm.