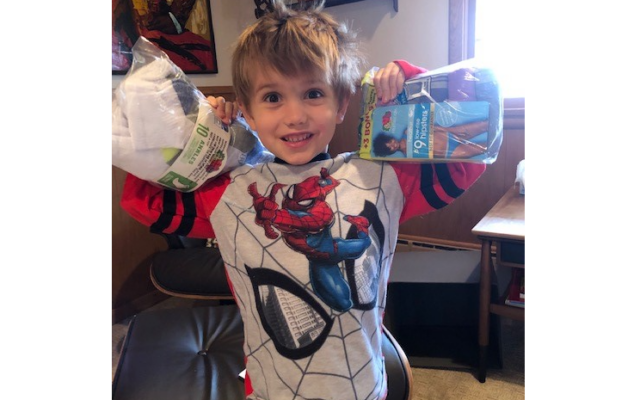 Gus Bottems with his donations

A homeschool session between mother and son turned into a warm-hearted lesson in giving.

Libby Bottem, a Kasota and St. Peter native, and her son, Gus, were going over vocabulary words during the Thanksgiving season.  That week, the words were “donation,” “empathy,” “compassion,” and “gratitude.”  When Bottem defined the words for Gus, she described her gratitude for having clothes on her back, which confused the boy at first.  Then Bottem went on to describe that there were people who couldn’t afford even socks or underwear.

Something clicked in the 6-year-old’s mind.  “Then I will be the one to get them for them,” Gus proclaimed.  From there, it became a community project.

Gus asked his friends, neighbors, family members, and some of their homeschool community if they could donate items.  Many took the challenge to heart, and mailed donations to the Bottem’s Watertown home, “Care of Gus.”

As donations came in, Gus charted his progress and tallied the items received for two months.  When it came time to deliver, the Bottem family chose Partners for Housing (P4H), a Mankato nonprofit that provides housing services and operates homeless shelters in Mankato and St. Peter.

Overall, Gus donated 446 pairs of brand new socks and underwear, and even a few winter hats.  His goal was 451 1/2.  “A little far off from his initial goal,” says his mother, “but we couldn’t be prouder of his progress!”

“This really is a very generous and thoughtful gift, said Kirsten Becker, Communications Mankater at P4H.  Becker said the items will be divided among three partner agencies in order to reach the most vulnerable families.