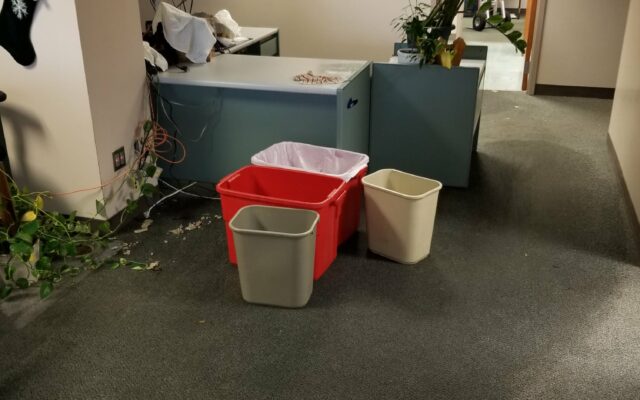 An inmate unhappy with his living arrangements flooded his cell – and consequently the surrounding areas – at the Brown County Jail.

The incident happened on Saturday, according to social media post by the New Ulm Police Department.

“…an inmate at the jail was upset over their living arraignments,” says the post.  “This individual took it upon themselves to flood the cell and living pod they were in yesterday.”

The post included photos of water-damaged ceiling tiles, a soaked carpet, and flooding in the breakroom of the NUPD office space.

Police say the various county and city departments housed in the building worked as a team throughout the incident, treating the responsible party with respect, despite knowing their offices below were being flooded.

“The inmate was removed from their cell without injury to themselves or to any officer, through communication, NOT force,” says NUPD’s post.  “We are happy that verbal techniques that all staff have been trained in, when dealing with difficult individuals worked.”

Police also addressed apparent questions about the jail water not being turned off sooner, saying the water was shut off as soon as possible.