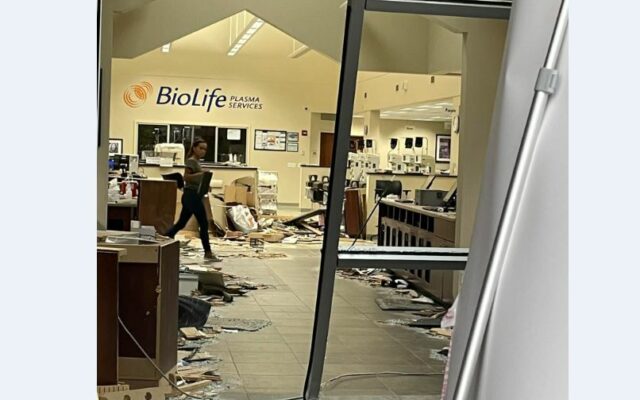 A Kasota woman is facing charges in a crash that heavily damaged a Mankato building.

Officers were dispatched to a call of a vehicle that had driven through a building shortly before 9 p.m. on Sept 8. Mankato police responded to the Biolife Plasma Services building on Teton Lane to find “the front entrance of the building was completely destroyed,” according to a criminal complaint.

Larsen told police she used to work at Biolife, but had been on leave from her job.  The complaint says she claimed the leave had been stressful for her and that she had planned the crash, hoping to kill herself.  She told investigators she waited until after 8:30 pm. because she thought all the customers would have been gone by that time.

Larsen allegedly claimed that she didn’t know anyone was inside the building at the time of the crash, although the complaint says a number of employees were still there. Investigators say one person had to jump out of the way as Larsen came crashing through the building.

Police say Larsen smelled of alcohol, had slurred speech, and had an unsteady gait.  A portable breath test put her blood-alcohol level at .23.