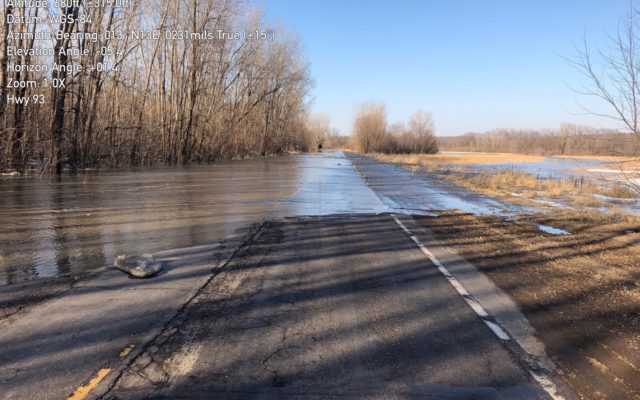 The Rush River runs over Highway 93 at Henderson. Picture from MnDOT.

(Mankato, MN) – Highway 68 has reopened after being closed due to a mudslide, but two other area highways remain closed.

Highway 68 from Highway 15 to just west of Blue Earth County Road 24 south of Courtland reopened Thursday after being closed due to a mudslide on June 29.  MnDOT says a second mudslide in the area was creeping closer to the road, and the slide that closed Highway 68  initially had seen additional activity.  Motorists are asked to use Highway 14 or find an alternate route.

Highway 93 from Highway 169 to Henderson closed on the afternoon of June 29 due to flooding from the Rush River.  The highway will remain closed until the water recedes and repairs can be made.  Officials say there is too much water over the road to see if there is damage.  Motorists can use Highway 19 as an alternate route.

Highway 99 east of Highway 13 closed around 10 a.m. on June 30 due to a failed culvert.  It remains closed at this time. MnDOT staff is waiting for the water to go down before they can make repairs.  Traffic is detoured to Highway 13, Highway 21, and Le Sueur County Rd 3.

Motorists can be fine up to $1,000 and/or 90 days in jail for traveling on a closed road.  In addition, anyone who requires rescue from a closed road will see other expenses and penalties.