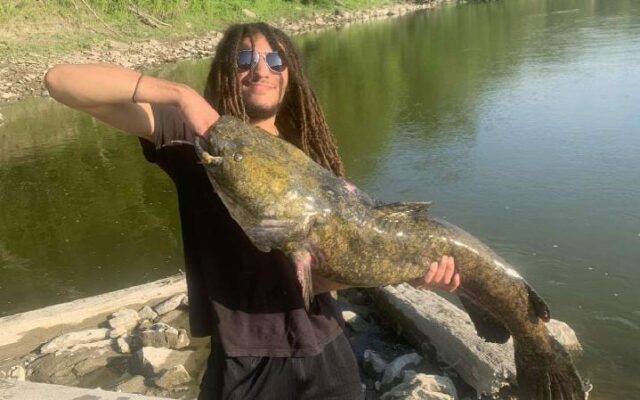 Leroy McClelland IV had begun fishing for walleye on the river just moments before he felt what he believed was a snagged line.  He asked SMN not to share his exact location.

“I started whipping my pole up, to try and get it out of the rocks I thought it was on,” McClelland said.  “The fish didn’t like that very much,” he laughed.  “so it took off and it was across the river in a couple of seconds.”

At that point, McClelland realized he dealing with a fish with a tail “about the size of a dog,” he described.  He called his friend over to help.

McClelland said he was using a medium-light action pole meant for walleye with 10 lbs braid line.  He used a walleye lure with a tiny jighead and a white twister tail.   He set the drag on his pole as low as it would go. It took about 15 minutes to reel in a flathead catfish.

The teen estimated the fish weighed about 30 lbs, but probably more.  He didn’t have access to a scale or anything to measure the catfish, so he made his best guess by trying to “curl” it like it was a dumbbell.  He’ll never know the official weight, however, because he decided to give the fish back to the river.

“We got enough pictures of it,” he said.  “It was pretty cool, though.  It was definitely one of those once-in-a-lifetime fish.”