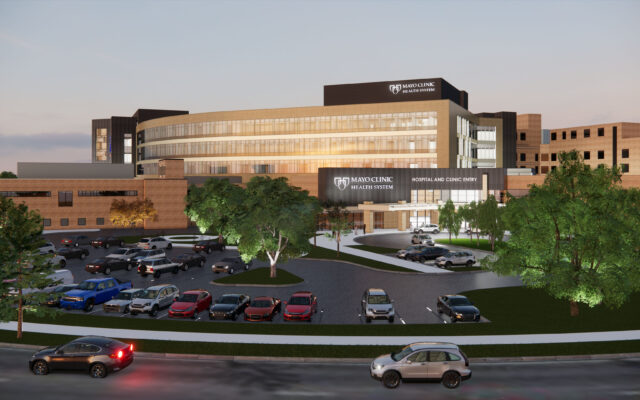 Mayo Clinic has announced an expansion and modernization project in Mankato.

The project will add 121 new hospital beds and increase overall hospital capacity by 59%, according to Mayo Clinic leaders who spoke with media Tuesday.

Work on the $155 million project will begin in March or April of this year, with completion slated for early 2024.

The project will include a three-floor vertical tower that will expand the existing emergency department, the Andreas Cancer Center, and the specialty clinic foyer.  The new hospital floors will link up to the existing structure.

The new facility will be a technologically advanced hospital of the future, according to Dr. James Hebl, Vice President of Mayo’s Southwest Region.  He says the new design will incorporate state-of-art care models and radiofrequency technologies.

Patient rooms will nearly double in size, with 100% private patient rooms, according to Lisa McConnell, the Chief Nursing Officer of the region.   McConnell says staff spaces will be improved and streamlined, including decentralized workstations and amenities that will “enhance joy at work.”

The project includes a new and expanded intensive care unit, a progressive care unit for the most critically ill patients, a new medical/surgical unit, a family birth center equipped with whirlpool labor tubs, and a state of art nursery.

The capacity increase will occur gradually over the next decade based on patient demand and staffing levels, according to hospital leaders.

Besides increasing the capacity, the expansion will keep patients local, reducing or possibly eliminating transfers to Rochester or Twin Cities hospitals.

“We are the main and only hospital here within the Mankato city limits, so all patient’s needs, regardless of what they may be, we are committed to caring for those needs locally,” says Dr. James Hebl, Vice President of Mayo’s Southwest region.

The original hospital was built in 1951.  Internal renovations and remodels have since taken place, but Mayo leaders noted that the infrastructure of the building is still from 1951, and say the campus has needed an overall upgrade.