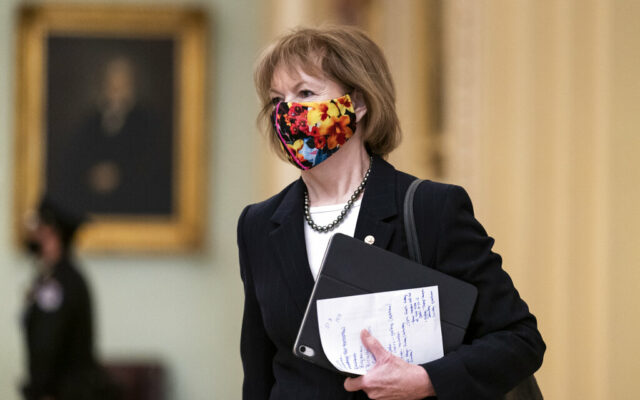 FILE - In this Feb. 10, 2021, file photo Sen. Tina Smith, D-Minn., arrives as opening arguments begin in former President Donald Trump's impeachment trial, at the Capitol in Washington. Smith is calling for federal investigations into possible price gouging of natural gas in the Midwest and other regions following severe winter storms that plunged Texas and other states into a deep freeze that caused power outages in million of homes and businesses. (AP Photo/J. Scott Applewhite, File)

Minnesota Senators Amy Klobuchar and Tina Smith are among a group of 22 Senate Democrats who signed a letter to the federal Office of Management and Budget opposing a proposal to remove the metropolitan designation from 144 small cities, including Mankato.

The designation allows the smaller metro areas to be eligible for federal funding for infrastructure and transportation.  It also puts the city in databases that bring new investments into the region, including communities within Blue Earth and Nicollet counties.

“Because of the reliance on this designation by various federal agencies and programs, this change could result in the loss of federal programming for many small, and mid-sized counties, cities, and towns across the country,” reads the letter.

The letter, also signed by Senate Majority Leader Chuck Schumer, asked the Office of Management and Budget to consider the effect of the coronavirus pandemic, citing data from the United States Postal Office that shows nearly 16 million people have changed addresses during the pandemic.

“The significant increase in people moving as a result of the pandemic demonstrates that population data based on the calendar years of 2020 or 2021 is likely to be misleading and inaccurate in predicting long-term trends about where Americans will choose to live,” says the letter.