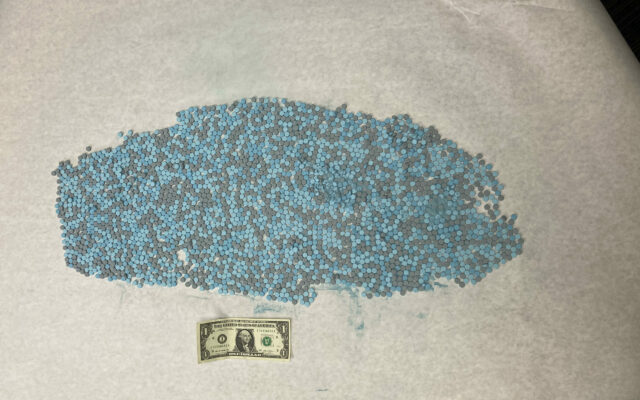 More than one and a half pounds of fentanyl pills were seized during a traffic stop in Faribault earlier this month.

Christopher Payne and his girlfriend, Kaley Maria Wethern, both 31, were arrested on charges of 1st-degree drug crimes May 13.

The traffic stop was initiated after the Cannon River Drug & Violent Offender Task Force received a number of tips that Payne was selling fentanyl.

Police say 1.6 pounds of blue and gray fentanyl pills were found in a backpack located in the vehicle.  A meth pipe and a loaded 9mm handgun were also found.  Investigators say Payne also admitted to driving with a canceled driver’s license.

A search warrant executed at the couple’s home the following day yielded a small amount of methamphetamine.  Agents also discovered a letter from Wethern that said people buying drugs from Payne might need Narcan, a medicine used to reverse the effects of an overdose.

The task force says the street value of the fentanyl is about $75,000.  Fentanyl pills sell for about $25 each.

Payne is also charged with a firearms violation.

CRDVOTF Commander Scott O’Brien said he was proud of the task force’s efforts.  “This significant seizure undoubtedly saved lives in Rice and Le Sueur County and others across the state of Minnesota.”