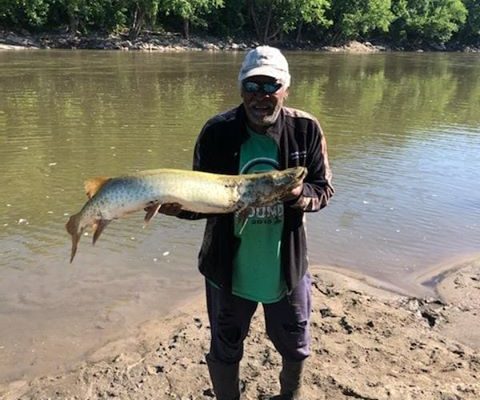 Say no more.  Boutchee’s father, Johnny, made headlines last fall with the 38-pound muskie he caught in the Minnesota River. The story was one of Southern Minnesota News’ most popular articles, getting shared across the state, and on national fishing forums.

The Minnesota Department of Natural Resources told SMN a muskie in the Minnesota River is a rare find.  But Johnny Boutchee has managed to do it again.

His daughter says Johnny was back in his favorite spot at Sibley Park Friday when he snagged a 32 inch muskie using the same rattle trap he had previously used. For the record, that’s 20 inches shorter than the last fall’s fish.

Lindsay Boutchee says her dad wasn’t able to weigh the muskie this time around, because he didn’t have his scale.

It seems with Johnny Boutchee’s luck, there’s always next time.