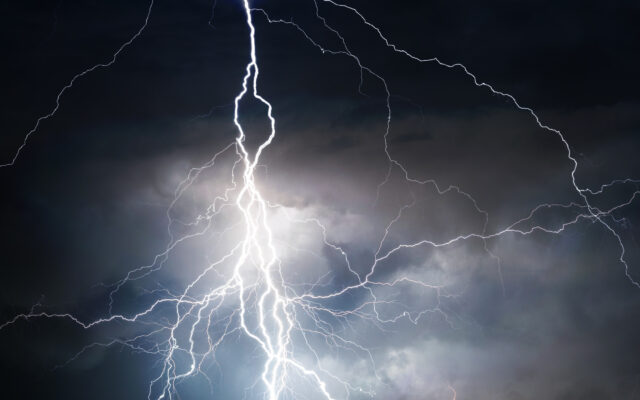 Minnesotans have seen plenty of bizarre and unusual circumstances throughout the last couple of years, and now we can add severe December weather to the list.

Not that severe weather itself is unheard of at this time of year.  We’ve seen plenty of blizzards or massive snowfalls that leave our country roads in treacherous condition.

But thunderstorms in December? The threat of tornadoes as we gaze upon our glowing Christmas tree lights?  All things are possible Wednesday night, according to the National Weather Service.

Coming off the heels of Friday’s snowstorm, temperatures are expected to hit nearly 60 degrees Wednesday, while winds gradually pick up throughout the day.  South winds will gust as high as 30 mph in the daytime, but NWS has issued a high wind advisory for Mankato and the surrounding areas, effective for 12 hours, starting at 6 p.m.

NWS says 60 mph winds are likely during the “potentially historic high wind event.” Says the agency: “In addition, a line of severe thunderstorms will develop along a very fast-moving cold front early this evening.   This line of thunderstorms could contain gusts in excess of 80 mph and some embedded tornadoes across southern and eastern Minnesota…”

Temperatures at set to plummet behind the high winds, with overnight lows dipping to 24 degrees.  Freezing rain and snow showers are also a possibility as the storms rip through southern Minnesota.

In a Special Weather Statement, NWS says Wednesday’s volatile day of weather is a first in December in Minnesota.  “An unprecedented outbreak of severe thunderstorms for this time of year is likely early this evening,” the statement reads.  Forecasters say they expect the storms to “race” across the state at 60 to 70 mph, warning of widespread wind damage and quickly deteriorating conditions.

NWS recommends making preparations in advance of the storms.  The agency says that because of the swift nature and high wind production, it could be difficult to find adequate shelter by the time storms approach.