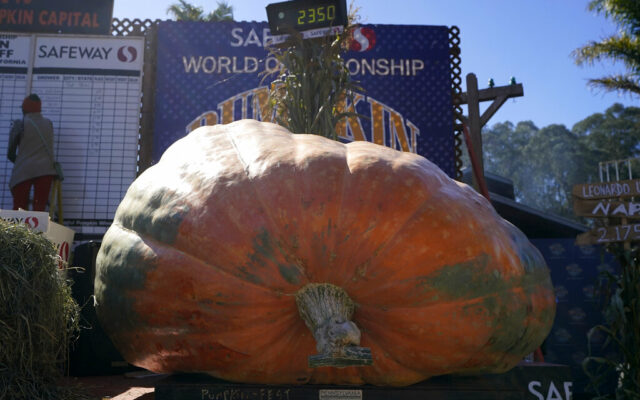 A pumpkin that weighed in at 2350 pounds, owned by Travis Gienger, from Anoka, Minn., sits on a scale after winning the Safeway World Championship Pumpkin Weigh-Off in Half Moon Bay, Calif., Monday, Oct. 12, 2020. (AP Photo/Jeff Chiu)

HALF MOON BAY, Calif. (AP) — An annual pumpkin-weighing contest in Northern California has a new winner: a horticulture teacher from Minnesota who raised a giant gourd weighing 2,350 pounds.

Travis Gienger, of Anoka, Minnesota, says he spent a lot of his free time in the pumpkin patch in his backyard, watering his plants up to 10 times a day and feeding and fertilizing them at least twice each day.

He then drove the gargantuan gourd for 35 hours to see his hard work pay off at the 47th World Championship Pumpkin Weigh-Off in Half Moon Bay, south of San Francisco.