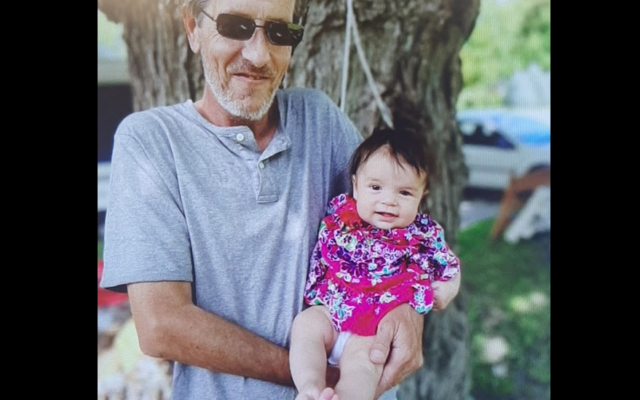 Steven Earle, pictured with his granddaughter

Authorities say a South Bend Township man who died in surgery after an altercation with his son was stabbed multiple times.

In a briefing with media Friday, Captain Paul Barta from the Blue Earth County Sheriff’s Office outlined the preliminary autopsy results, which revealed that Steven Earle was stabbed multiple times in his abdomen and torso.  He also suffered a wound on his leg and had injuries to his hands.

Investigators believe the murder weapon was a dagger-type knife that was recovered at the scene the following day.

Steven Earle called 911 at about 1 p.m. Wednesday and reported that his son, who had previously assaulted him, had a knife.  Dispatchers heard the sound of a struggle and screams as deputies were en route to the scene. The call was eventually disconnected. Repeated efforts to reach Steven Earle went unanswered.

Police say Travis Earle met them outside the residence, where he acknowledged he and stabbed his father.  He also indicated that Steven Earle might be dead, according to Barta.  Travis Earle was immediately detained.

Barta said Steven Earle was discovered inside the residence “bleeding badly” from his torso.  Lifesaving efforts were performed and Steven Earle was transported to Mayo Clinic Mankato by ambulance.  Barta says Steven Earle was conscious during the ride and implicated his son in the stabbing.  Concerned that he might not survive the attack, deputies secured the scene after the attack, according to Barta.

Investigators learned of Steven Earle’s passing at about 9 p.m. the following night. They were unaware that he had been transferred to Mayo Clinic in Rochester until they learned of his death.

Travis Earle had recently moved back into his father’s South Bend Township residence, according to Barta, who said that the two had argued over bills prior to the stabbing.

Steven Earle’s adult daughter also lived on the property, but it’s not clear how much time she spent in the home with her father and brother.

Police say Travis Earle has no specific criminal record, although deputies were called to a domestic disturbance in July 2020.  Barta says it was a relatively minor situation; father and son agreed to be separated and Travis Earle agreed to stay somewhere else for the night.  No one was arrested in that incident.

Travis Earle has been charged with two counts of 2nd-degree murder.

Blue Earth County Attorney Pat McDermott said those charges could change, as the investigation is in its very beginning stages.   “We’re making our decision based upon the limited information that we have at this point and time and we will continue to reassess the situation as additional information comes in,” he said of the charges.  He noted that the prosecutor’s office is awaiting findings from the Minnesota Bureau of Criminal Apprehension.

McDermott said he is not yet certain which attorney will prosecute the case.  He wasn’t certain if Travis Earle had retained an attorney yet, but said he would know more after the first court appearance.

The final autopsy results, which will be performed by the Southern Minnesota Regional Medical Examiner’s Office, could take several months to complete

Travis Earle is in custody at the Blue Earth County Jail.