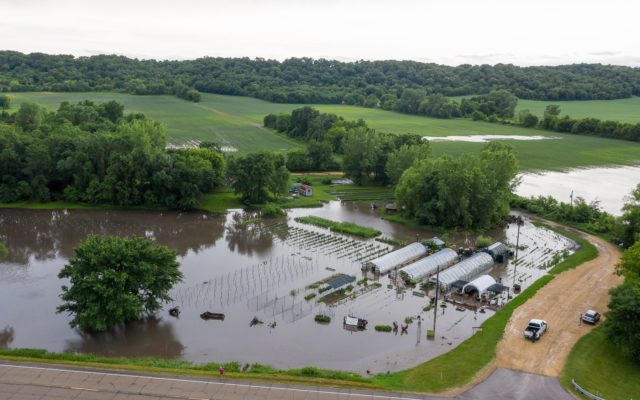 (Mankato, MN) – It had been a banner year at Valley Veggies, until 12 inches of rain fell Sunday night into Monday, leaving the vegetable and flower farm underwater.

Co-owner John Anderson told Southern Minnesota News that the farm staff was shocked to see the entire field flooded.  “All of our plants were looking so good, had a great year going,” he wrote to SMN.

On Monday morning, Valley Veggies reported on social media that the farm had received at least 12 inches of rain.

As for the damages at Valley Veggies, Anderson said they won’t know for certain how bad it is until the water goes down.  “We will see how fast the water drops down off the plants,” he wrote.   He said if the plants are covered in silt, they’ll have to be rinsed off.

A few miles down Highway 68, heavy rains caused a mudslide that closed the highway near Courtland.  Crews had been working at the location to repair a slope that had collapsed during previous heavy rains.  The project had been near completion.

The possibility of more rain is forecast Tuesday night and Wednesday.  Friday also carries a chance of rain ahead of a scorching Fourth of July, with temperatures expected to hit the low to mid-90’s.