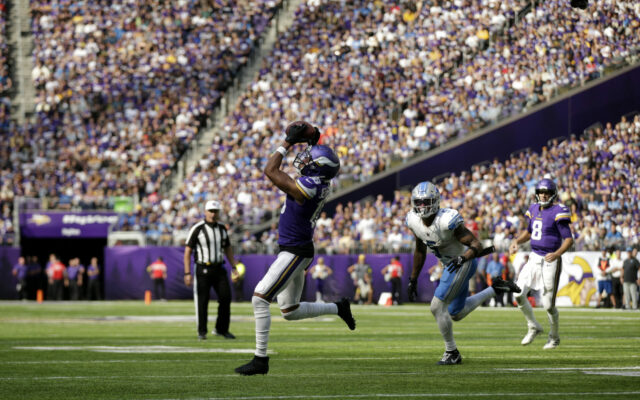 The Vikings finished the regular season 13-4 after beating the Chicago Bears 29-13. Jefferson finished his third year in the league with 1,809 receiving yards and 128 receptions. Both totals led the NFL. Jefferson says he loves playing on the big stage and his goal is to reach the Super Bowl.

Jefferson won the national championship with LSU in his last college game, making this three-year wait for a postseason appearance with Minnesota that much more frustrating for the NFL’s leading receiver.

Four weeks after clinching their division, and more than 32 months after drafting Jefferson, the NFC North champion Vikings have finally entered the playoffs.

“I enjoy those big-platform games, and of course I want to get to that Super Bowl,” Jefferson said after Minnesota’s 29-13 tuneup win at Chicago on Sunday. “So whoever’s standing in the way, we’ve got to knock them down.”

With a league-record 11-0 mark in one-score games this season, eight of them after trailing at some point in the fourth quarter, the Vikings have cut their teeth in more than their share of tense situations. This is another level of pressure, though, that Jefferson and several of his teammates have never experienced in purple.

The Vikings (13-4) will host the New York Giants (9-7-1) on Sunday in the wild-card round, the first playoff game at U.S. Bank Stadium since the Minneapolis Miracle last-play win over New Orleans five years ago. The last postseason game for the Vikings was a divisional-round loss at San Francisco three years ago.

“You have to have the mindset that, ‘I’m the only person that can stop this play or offensively I have to make this block or this won’t get a touchdown,'” defensive tackle Harrison Phillips said. “So being able to have that for a full 60 minutes or however long it takes, you have to some type of maturity. For our younger players who haven’t had that experience or even veteran players who never played in the playoffs, that could be a learning curve.”

WHAT’S WORKING
With the excellence of Jefferson, the play-calling by coach Kevin O’Connell and the precision from quarterback Kirk Cousins, the Vikings have a passing attack that’s as dangerous, diverse and healthy as any team in the league. Four players had 60-plus receptions this season, and six players had 25 catches or more. K.J. Osborn has particularly stood out down the stretch.

WHAT NEEDS HELP
The Vikings rank eighth in the NFL in touchdown rate inside the 20, but they’re only 20th in the league in reaching the end zone from goal-to-go situations. That’s called the low red zone, where one of their few setbacks against the Bears developed at the end of the first half.
The Vikings had first-and-goal at the 6 with 57 seconds remaining, but after burning two timeouts and running three plays for no net gain, they scrambled for a 24-yard field goal at the buzzer that didn’t count because they had 12 men on the field.

STOCK UP
Cornerback Patrick Peterson had five interceptions and 15 pass deflections, his highest totals since his second season in 2012. He played more than 95% of the snaps on defense at age 32.

STOCK DOWN
Cornerback Cameron Dantzler Sr. played in only 41 snaps over the final nine games. He was inactive at Chicago after a second aggravation of the ankle injury that first sidelined him during the game at Washington on Nov. 6, and Duke Shelley now has a firm grip on the starting spot. Shelley broke up a pass and had his first career interception on Sunday.

INJURY REPORT
After missing five straight games, center Garrett Bradbury will practice this week on a limited basis with no guarantee he’ll return from a back injury.
“I just want Garrett to give it a go and see if he can turn the corner, and possibly help us, but at the same time I don’t want to put him in a position where he may not be the best,” O’Connell said.
Albeit against a much more vulnerable defense and an opponent with only a draft pick to play for, the Vikings were more satisfied by the way Chris Reed played at center. Reed had been forced into action after Austin Schlottman suffered a broken leg on Jan. 1 at Green Bay.
Blake Brandel will be designated for return from injured reserve, on track to complete his recovery from a knee injury and fill in for right tackle Brian O’Neill. If Brandel is not ready, Oli Udoh would stay in the spot that opened when O’Neill hurt his Achilles tendon and calf against the Packers.

KEY NUMBER
1,809 — Jefferson’s receiving yardage total in 17 games this season, the sixth-highest in history. The elusive 2,000-yard mark will land on the goal list for next season for Jefferson, who also led the league with 128 receptions.
“It’s just another opportunity for next year, something to strive for. But as long as we’re in these playoffs, as long as we keep fighting, having this extra game, it doesn’t really matter,” Jefferson said.

UP NEXT
The Vikings played the Giants just three weeks ago, so the preparation for a postseason rematch ought to be more streamlined — and include more self-scouting.
“I think it’s important that we look at our scheme in all three phases, what we’ve done and trying to identify where we’re vulnerable, but then also the things we’ve done well,” O’Connell said. “Can we take things to another level and can we do some new things and use different personnel?”
___
AP NFL: https://apnews.com/hub/NFL and https://twitter.com/AP_NFL