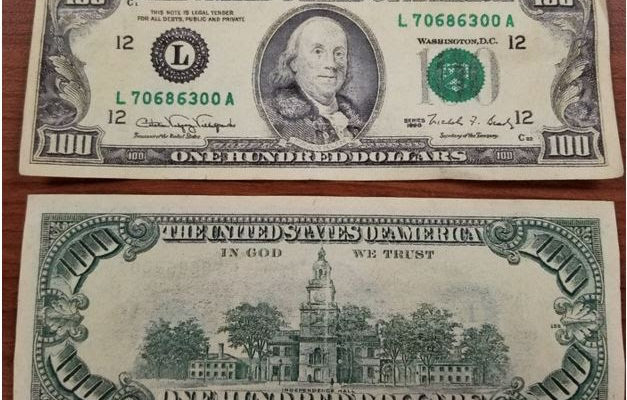 An image of one of the counterfeit $100 bills passed at a Mankato store. Image from Mankato Public Safety

(Mankato, MN) – One person is behind bars after multiple reports of counterfeit money being passed at Mankato businesses.

Police say Johnyea Tieara Lash, 18, of Chicago, was arrested on possible charges of counterfeiting of currency, a gross misdemeanor.  Lash was allegedly caught with one of the counterfeit bills in her possession.

It’s believed four suspects are involved, according to a release from Mankato Public Safety.  Sgt Chris Baukol said police are still trying to identify a white female and a black male believed to be suspects.  A third female was identified and released at the scene, according to police. Police do not believe the residents are local to Mankato.

Police say it was counterfeit $100 bills that were used to make purchases at three local businesses in the Hilltop area  Baukol said the counterfeit cash is unique in that it was the older style of $100 bills.   He said police are trying to determine if any other Mankato businesses took in the counterfeit money.

Police are looking for any information about the suspects, including surveillance images.

Baukol recommends that businesses use a simple counterfeit marking pen, use extra precaution if a suspicious bill is presented, and collect as much information as possible about the person trying to use the bill.