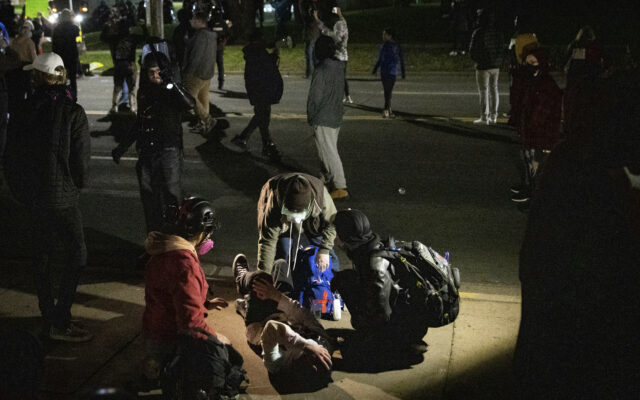 A man is injured as protesters clash with police in front of the Brooklyn Center Police station on Sunday, April 11, 2021, in Brooklyn Center, Minn. The family of Daunte Wright, 20, told a crowd that he was shot by police Sunday before getting back into his car and driving away, then crashing the vehicle several blocks away. The family said Wright was later pronounced dead. (AP Photo/Christian Monterrosa)

BROOKLYN CENTER, Minn. (AP) — Prosecutors expect to decide Wednesday whether to charge the white former police officer who fatally shot a Black man during a traffic stop in a Minneapolis suburb, sparking nights of protests and raising tensions amid the nearby murder trial of the ex-officer charged with killing George Floyd. Brooklyn Center Mayor Mike Elliott says the city was getting ready to fire the officer, Kim Potter, when she resigned two days after shooting 20-year-old Daunte Wright. The suburb’s police chief, who has also resigned, has said he believed Potter mistakenly grabbed her gun when she tried to pull out her Taser.