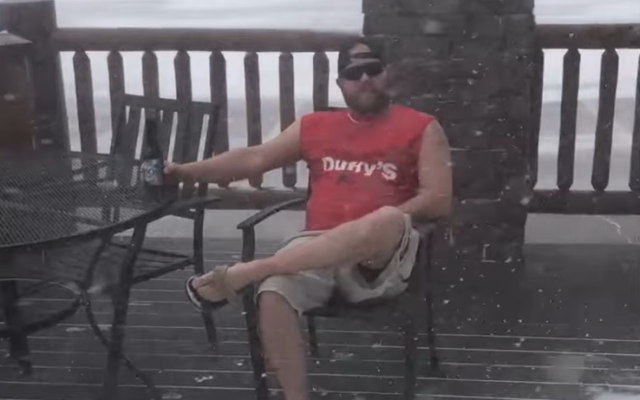 A Windom bar owner donned his summer apparel and invited patrons to join him on the patio for drinks as a blizzard raged around him.

Duffy’s Bar & Grill co-owner Will Broers lounged in a chair on the bar’s patio Wednesday. He clutched a cold beer in one hand and rested his flip flop-clad foot on his bare leg as he spoke to customers via a social media video. Snow swirled around Broers as he casually invited patrons for drinks on the deck, promising to clear the developing snowdrifts before customers arrived.

Minnesota bars and restaurants are allowed to open only for outdoor dining, a restriction put in place but Governor Tim Walz in an effort to slow the spread of the coronavirus.

Broers sent a tongue-in-cheek “thanks to the governor,” for allowing the bar to remain open for outdoor service as wind chills settled in at 10 degrees below zero.

The bar announced on Facebook about two hours later they would shut down early due to “the lack of people who accepted my invitation to sit outside for a beer.”

Wednesday’s blizzard delivered winds of up to 60 mph in southern Minnesota, along with five inches of snow in areas such as North Mankato and Winthrop.