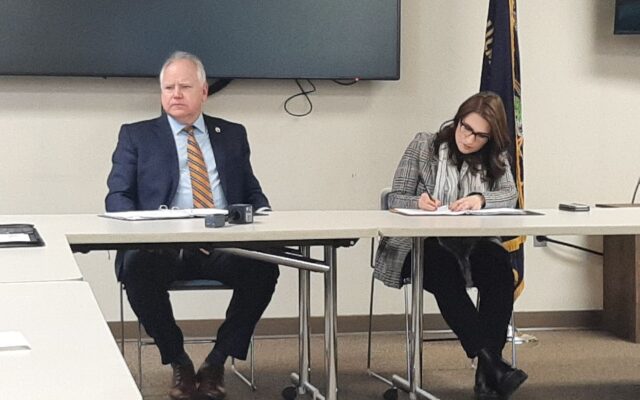 Walz and Lt Gov Peggy Flanagan held the roundtable at the New Ulm fire hall, where they asked officials for their feedback on public safety needs.  Representatives from each city were present, including Mankato Department of Public Safety Director Amy Vokal and New Ulm Police Chief Dave Borchert.

New Ulm would receive more than $242,000 per year under the governor’s budget plan, while Mankato would get more than $763,000 per year.  The funding would be provided for three years.

“We wanted to use today as an opportunity to hear what’s working, what you could use, how you see maybe some of those fundings being used,” Walz said as he opened the meeting.

Many of the requests centered around mental health issues.

“Our mental health calls are much higher,” Borchert noted. “Last week we had four individuals in the ER that were there because of mental health.  Realistically, there was no place to transport them.”

Mankato Department of Public Safety Director Amy Vokal agreed that mental health beds are needed.  She said officers are transporting people in a mental health crisis to South Dakota, Wisconsin, and Fargo. “That’s not doing them any good,” she said.

Borchert said he would like his department to invest in an unmarked squad car for transporting domestic violence and other victims.

Vokal spoke of the need for a  Bureau of Criminal Apprehension facility in southern Minnesota.  She said some smaller agencies that rely on the agency are traveling three hours to the BCA.  She shared her vision of a centrally-located facility with digital and computer forensics exams, and advanced cell phone technology tools.  Tools, she says, that Mankato or other communities can’t afford.  She also advocated expanding lab technology due to long wait times.  “It does make it harder to solve crimes,” Vokal stressed.

Walz agreed with Vokel, calling the potential facility a smart investment that was long overdue.

The governor touched on the unique challenges that regional centers such as Mankato experience. “On any given day might draw more people into your community from outside that actually live there.”