Mankato School board member alleges systemic racism by the board 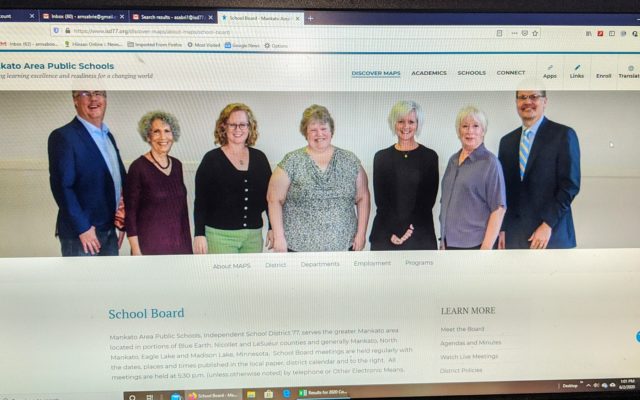 (Mankato, MN) – A Mankato school board member alleges that systemic racism is a problem within the District 77 board.

In a post on social media shared by nearly 100 people, current board member Abdi Sabrie said he had endured “intentional exclusion” of board governance and officer elections.  He also maintains that matters are often decided prior to the meetings.

Along with his post, Sabrie shared a photo of the board on the District 77 website, in which he was not included.  Sabrie said he had asked at the beginning of the year for photographs that would recognize the different backgrounds and children in the district.  “Without discussing the issue, they went ahead and decided to exclude me all together,” he claimed in his post.

School Board Chair Darren Wacker responded to Sabrie’s allegations on the Mankato Area Public School Facebook page.  Wacker said he was sad and disappointed by the comments Sabrie had made.

Wacker said allegations that Sabrie was intentionally shut out of the school board photo is “simply untrue,” and announced that he is calling for a special school board meeting for later this week.

“Their expression represents for me their desire for me not to exist,” Sabrie said in his post.  “I feel their collective knees on my neck, I feel my humanity negated, my oath and function of public office blocked”

Sabrie said he will run for a second term in the district later this year in hopes that he can bring positive change to the classroom.

The picture of the school board on the District 77 website appears to have been removed since the Sabrie’s post.